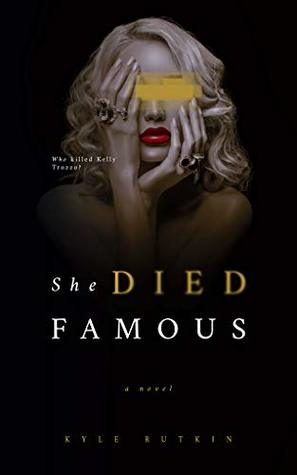 A Star is Born meets Gone Girl, in this dark and twisted love story with an unforgettable conclusion.

With no suspect in custody, authorities turn their attention to best-selling author Kaleb Reed, whose obsessive relationship with the star has been followed by social media and tabloids alike.

In his online confession, Reed claims that his relationship with Trozzo began with a tweet, an unexpected endorsement from the pop star herself. Almost overnight, Reed’s novel garners national attention, and the reclusive writer is thrust into the spotlight. But according to Reed, the endorsement came with a price.

In the days that follow, Reed is invited to Trozzo’s Los Angeles mansion, where he is solicited to write her memoir. Lured by her physical appeal and charisma, Reed delves further and further into Trozzo’s fantasy world, ensnared by a twisted story of betrayal and vengeance.

On the night of Trozzo’s death, Reed finally discovers his true role in this story, as well as the pop star’s alternative ending to his famous novel—one that leads to his arrest.

Set in Hollywood, She Died Famous is an innovative thriller that exposes the dark side of fame and obsession in today’s digital landscape. The story’s shocking twists and unreliable narrator will have every reader asking: Who killed Kelly Trozzo?

This is not what I expected …in a good way! I decided to pick this book up because of the gorgeous cover (I mean…. look at it!

). The writing style was very unique ,it’s told in blogposts, Newspaper articles, interviews, and police transcripts. Sometimes I felt like it’s real ,Kelly is real…and I’m actually reading a news report about a dead Hollywood it girl. I LOVED it !!!! Truly , such a good book and a unique story. Would definitely recommend for you to check this mystery out. The perfect read for October.
trigger warning – mention of drug use

FAVORITE QUOTES FROM THE BOOK

This is Hollywood. Your princess is cunning. Prince Charming is evil. Dragons, demons, and darkness are hidden in us all. There are no bluebirds, no fairy godmothers. No shortage of monsters. We must save ourselves.

—–
The place we fell in love. Before the secrets. Before my sins. Before I ever published my novel.
—–
Authors don’t become overnight sensations, or casually land on the New York Times Best Sellers list. We are supposed to fight, claw, write until we outlast the amateurs, master the craft.
—-
She was right. That book changed my life. It changed all our lives. Look where we are, detective. And there’s so much more to uncover.
—–
And because of that, I won’t be just another girl who died famous. My story will be written in the skies.

Tell me in the comments, What’s your favorite book at the moment?